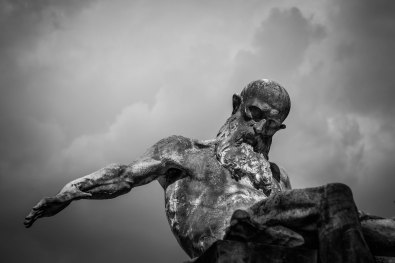 A new year’s resolution the ancient Greek theologians would be proud of.

“Telos.”  This interesting Greek word you probably have heard, however only those with a background in etymology or philosophy know the powerful weight of it.  A quick google search will give you a definition along the lines of “goal” or “end objective.”  While this is correct, like so much information online it is deeply void of its true historical and contextual meaning.

There isn’t a good synonym in the English language.  “Telos” refers to the full purpose of something.  For example, an acorn’s telos is not only to grow into an oak tree, but a healthy oak tree that reproduces many more oak trees.  It doesn’t stop here.  Its full telos isn’t achieved until it is seen to continually adapt to its environment and thrive by playing a key role in the ecosystem, when the single tree plays a healthy role within its species by making oxygen, providing a safe place to live for animals, nourishment for other living things to eat, and ultimately dies providing healthy compost for the next generation to achieve it’s telos.  Telos is looking at a grand majestic purpose from the perspective of one seed. Many believe that one of the deepest hungers in the human heart is to understand one’s telos.  What is my purpose and do I matter?  Not does “it” matter but do “I” matter?

Many people who want to debate Christianity or even religion in general miss a very important part of it.  They love to go back and forth on the historical piece.  Don’t get me wrong, that’s a great place to have debates and fun to do so!  However, it is only a very small piece of the pie.  Christ answers humanity’s telos and does so in a way that also addresses the complex sentient part of us.

This week I led a funeral for a strong Christian family. In the last days of their loved one’s life it wasn’t historical arguments, apologetics, or even empirical evidence but Christ’s telos that gave deep strength to the family.  Ignoring this part of faith is like picking up a novel and discrediting it because of a misspelled word. Even if your right about the misspelled word you’re missing the point, what the powerful story is doing.  It’s interesting to me how some people can be right in what they observe and yet nearly blind to the actual point. The Bible is a collection of many different literary forms and styles written over thousands of years.  Some are detailed firsthand accounts, others are parables, synecdoche, metonomy, anthropomorphism and so on. However, they all work to explain one powerful telos – Christ.

This year I encourage you to look into the Bible beyond quick Google searches.  I want to challenge you to seek its telos.  Make time for the metaphysical.  It’s powerful and when people see it everything in their life changes.

Like it? Consider sharing the blog with your friends.

Husband, father, pastor. I work here www.encountertrinity.com. Wrestle through ideas here www.luke117.com. I don't have all the answers, but I love the journey searching for them! View all posts by Mike & Leslie Colaw

One thought on “A new year’s resolution the ancient Greek theologians would be proud of.”

Top Posts in the last 24 hours